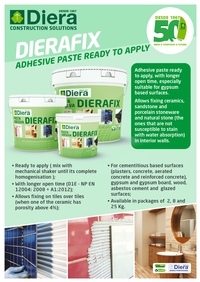 Allows fixing ceramics, sandstone and porcelain stoneware and natural stone (the ones that are not susceptible to stain with water absorption ) in interior walls.

- Ready to apply (mix with mechanical shaker until its complete homogenisation );

- Allows fixing on tiles over tiles (when one of the ceramic has porosity above 4%);

AQUEOUS VARNISH FOR PROTECTION AND EMBELLISHMENT OF WOOD FLOORING 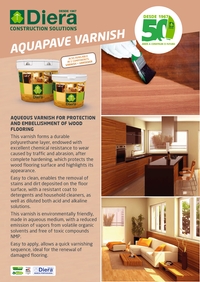 This varnish forms a durable polyurethane layer, endowed with excellent chemical resistance to wear caused by traffic and abrasion, after complete hardening, which protects the wood flooring surface and highlights its appearance.

Easy to clean, enables the removal of stains and dirt deposited on the floor surface, with a resistant coat to detergents and household cleaners, as well as diluted both acid and alkaline solutions.

This varnish is environmentally friendly, made in aqueous medium, with a reduced emission of vapors from volatile organic solvents and free of toxic compounds NMP.

Easy to apply, allows a quick varnishing sequence, ideal for the renewal of damaged flooring.

Located close to the Leça da Palmeira Lighthouse, the Boa Nova Tea House is a Michelin star restaurant awarded in 2016 under the direction of the Chef Rui Paula and accommodated in the building which was one of the first projects (1958-1963) of the Architect Álvaro Siza Vieira. Built on the rocks, only 2 meters high from the water, having the sea as a unique scenario, it is one of the most emblematic projects of this prestigious Architect, classified as a National Monument and included in the International Route of Architecture.

The building was designed following a contest of the Matosinhos City Hall in 1956, having as a winner the Architect Fernando Távora, who gave the project to one of his early-stage employees, Álvaro Siza, after choosing the Boa Nova rocks to the implantation of the construction.

In the beginning the venue was used as a Tea House until 2011, at the time of concession contract term. Reinaugurated in July 2014, after a complete restoration process of the building, after more than 2 years of being abandoned, this space was submitted to a new intervention in 2015, being used the high quality Aqueous Paint 100% acrylic DIERA TINCRYL, with high resistance to weathering, for the protection of the exterior building façades.

Silicate based solution on aqueous dispersion, to be used as hardener on cementitious plasters where a weak cement hydration has occured or a fast loss of the mixing water.

- Allows the recovery of the superficial adhesion of the surface;

- Ready to apply with roller, brush or spray; 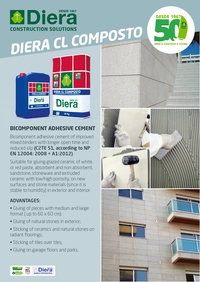 Suitable for gluing glazed ceramic of white or red paste, absorbent and non absorbent, sandstone, stoneware and extruded ceramic with low/high porosity, on new surfaces and stone materials (since it is stable to humidity) in exterior and interior.

- Gluing of natural stones in exterior;

- Sticking of ceramics and natural stones on radiant floorings;

- Sticking of tiles over tiles;

- Gluing on garage floors and parks.