Has excellent durability, chemical resistance and elasticity. When applied on a continuous layer offers a perfect waterproof, avoiding also the occurrence of efflorescences. 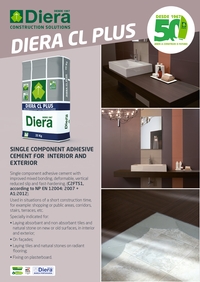 -  Laying absorbant and non absorbant tiles and natural stone on new or old surfaces, in interior and exterior; 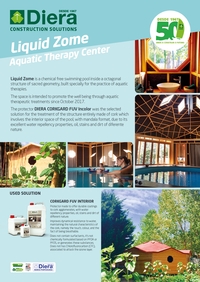 Liquid Zome is a chemical free swimming pool inside a octagonal structure of sacred geometry, built specially for the practice of aquatic therapies.

The space is intended to promote the well being through aquatic therapeutic treatments since October 2017.

The protector DIERA CORKGARD FUV Incolor was the selected solution for the treatment of the structure entirely made of cork which involves the interior space of the pool, with mandala format, due to its excellent water repellency properties, oil, stains and dirt of diferente nature. 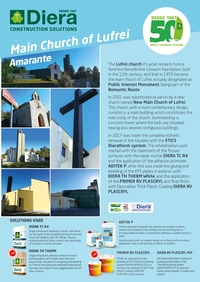 The Lufrei church it?s what remains from a feminine Benedictine Convent foundation, built in the 12th century, and that in 1455 became the main church of Lufrei, actually designated as Public Interest Monument, being part of the Romantic Route.

In 2001 was substituted as parish by a new church named New Main Church of Lufrei. This church, with a more contemporary design, consists in a main building which constitutes the main body of the church, dominated by a concrete tower where the bells are situated, having also several contiguous buildings.

In 2017 was made the complete esthetic renewal of the façades with the ETICS Dieratherm system. The rehabilitation work started with the treatment of the fissure surfaces with the repair mortar DIERA TC R4, and the application of the adhesion promoter ADITEK P; after this was made the gluing and levelling of the EPS plates in exterior with DIERA TH THERM White, and the application of the PRIMER RV PLASCRYL and final finish with Decorative Thick Plastic Coating DIERA RV PLASCRYL. 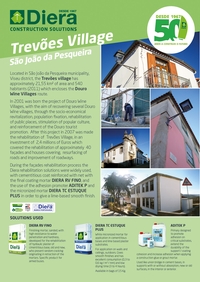 This village has buildings classified as buildings of public interest and national monuments, due to its once political importance in the region, having been county seat between XII and XIX century, and is today an important tourist attraction in the Douro wine region, because of its beautiful landscape and its architecture passing through several different times and styles.

In 2001 was born the project of Douro Wine Villages, with the aim of recovering several Douro Wine villages, through the socio-economical revitalization, population fixation, rehabilitation of public places, stimulation of popular culture, and reinforcement of the Douro tourist promotion.  After this project in 2007 was made the rehabilitation of  Trevões Village, in an investment of  2,4 millions of Euros which covered the rehabilitation of approximately  40 façades and houses covering,  resurfacing of roads and improvement of roadways.

During the façades rehabilitation process the Diera rehabilitation solutions were widely used, with cementitious coat reinforced with net with the final coating mortar DIERA RV FINO, and the use of the adhesion promoter ADITEK P and the micronized mortar DIERA TC ESTUQUE PLUS in order to give a lime-based smooth finish.