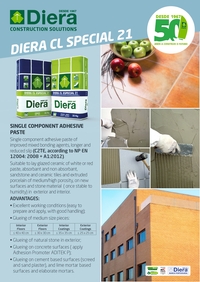 Suitable to lay glazed ceramic of white or red paste, absorbant and non absorbant, sandstone and ceramic tiles and extruded porcelain of medium/high porosity, on new surfaces and stone material  ( once stable to humidity) in  exterior and interior. 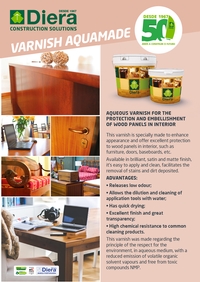 This varnish is specially made to enhance appearance and offer excellent protection to wood panels in interior, such as furniture, doors, baseboards, etc.

Available in brilliant, satin and matte finish, it?s easy to apply and clean, facilitates the removal of stains and dirt deposited.

- Allows the dilution and cleaning of  application tools with water;

This varnish was made regarding the principle of the respect for the environment, in aqueous medium, with a reduced emission of volatile organic solvent vapours and free from toxic compounds NMP.

The Water Pavillion was one of the thematic stands in Expo 98 in Lisbon, and in the end of the exposition it was dismantled and reinstalled in the Park of Porto City. The building was made by the architects Alexandre Burmester and José Carlos Gonçalves.

In November 2016 it was closed for expansion and remodeling of the building and surrounding area. The intervention will allow the increase of the exposition area, creating a multipurpose room and elevator, and some more administrative areas.

The Diera solutions were chosen for the thermal insulation of the enlargement structure of the building. The Adhesion Primer ADITEK P was previously applied on the surface, the collage of the EPS sheets with the adhesive cement Diera Therm LC Grey, and subsequent application of the Primer RV Plascryl and Diera RV Plascryl. 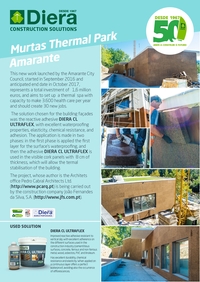 The first big historical reference to the minero-medical Spring waters of Amarante happens in 1726, with reference to ?Quinta das Murtas?, also called as ?Caldas? in old documents. In 1893, was built a rugged shed, next to the spring water, and the owner of the Farm made some tanks where baths were given. The price of the first class bath was 100 reis, the 2nd class 60 reis. The first Permit for its installation was in 1895, and in 1968 passed to Amarante City Council, which in 2013 took over the Spas building project.

This new work launched by the Amarante City Council, started in September 2016 and anticipated end date in October 2017, represents a total investment of  1,6 million euros, and aims to set up  a thermal  spa with capacity to make 3.600 health care per year and should create 30 new jobs.

The solution chosen for the building façades was the reactive adhesive DIERA CL ULTRAFLEX, with excellent waterproofing properties, elasticity, chemical resistance, and adhesion. The application is made in two phases: in the first phase is applied the first layer for the surface?s waterproofing, and then the adhesive DIERA CL ULTRAFLEX is used in the visible cork panels with  8 cm of thickness, which will allow the termal stabilisation of the building.

The project, whose author is the Architets office Pedro Cabral Architects Ltd. (http://www.pcarq.pt) is being carried out by the construction company João Fernandes da Silva, S.A. (http://www.jfs.com.pt). 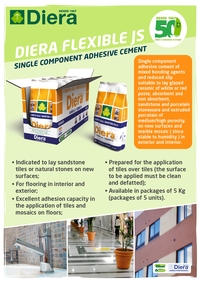 Single component adhesive cement of mixed bonding agents and reduced slip suitable to lay glazed ceramic of white or red paste, absorbent and non absorbent, sandstone and porcelain stoneware and extruded porcelain of medium/high porosity, on new surfaces and marble mosaic (since stable to humidity) in exterior and interior.

- For flooring in interior and exterior;

- Excellent adhesion capacity in the application of tiles and mosaics on floors;

- Prepared for the application of tiles over tiles (the surface to be applied must be clean and defatted).